ACT NSW NT
QLD SA TAS
VIC WA
My Community Diary
Event Completed
The event you have selected has been completed and is no longer available!
To Be Held At

This multi-award-winning theatrical extravaganza of minimalism, adapted by Patrick Barlow, from the novel by John Buchan and inspired by the movie of the same name by Alfred Hitchcock will have audiences suspending their disbelief beyond all measure.

Murder, mayhem and madcap shenanigans, worthy of the Monty Python crew are delivered by four actors, purportedly playing 139 parts, in this rollicking fast-paced whodunit spy story packed with more ham and cheese that you will find in any deli. Not to be missed!

An Amateur Production BY ARRANGEMENT WITH ORIGIN™ THEATRICAL, ON BEHALF OF SAMUEL FRENCH, LTD” 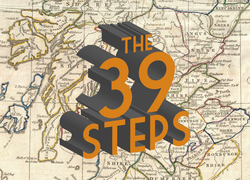