NSW Public Libraries are proud to present General Sir Peter Cosgrove in conversation discussing his extraordinarily full and eventful life, and of course, his new memoir, You Shouldn’t Have Joined...

General Sir Peter Cosgrove AK, CVO, MC is one of Australia's most significant public figures. As a soldier, he saw action in Vietnam, winning the Military Cross, and rose to the very top of his profession, becoming Chief of the Defence Force. In 2014, Cosgrove became Australia’s Governor General.

You Shouldn’t Have Joined... is the memoir of Cosgrove's extraordinarily full and eventful life, covering some of his military life, whilst also allowing us an incredible insight into the role and world of Australia’s Governor General. Every step of his journey has been accompanied by his wife Lynne – who is very much part of his story.

This event is presented in conversation with Richard Glover, author of Love, Clancy: A Dog’s Letters Home, a heartfelt and hilarious book for anyone who has tried to imagine what their dog was thinking. You can lead a dog’s life for day with pup Clancy, who sends letters from the big smoke to his parents in the bush.

Numbers are limited for this free virtual event and bookings are essential.

Get your ticket here!

Purchase a signed copy of You Shouldn't Have Joined... with 24% discount from Booktopia. There are a limited number of signed copies available.

Attendees registered have the opportunity to submit their questions for Cosgrove and will receive an exclusive link via email to purchase signed copies of General Sir Peter Cosgrove’s new memoir, You Shouldn’t Have Joined...

This presentation will be broadcast online using Zoom. Book your place and we will send you a Zoom link to join the meeting (download and install from zoom.us if you haven't already). 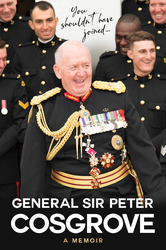