ACT NSW NT
QLD SA TAS
VIC WA
My Community Diary
Refine your search by providing your search term, then the location of your search.
Event Completed
The event you have selected has been completed and is no longer available!
To Be Held At

ARIA Award-Winning Children’s Act Teeny Tiny Stevies are hitting the road and heading straight for Coffs Harbour on Monday 20 Sept after the release of their third studio album into the world from inside the Melbourne lockdown of 2020. Their tight harmonies, rich melodies and infernally catchy choruses have captured the ears of children and parents alike.

Established in 2015 by sisters Bethany 'Beth' and Sibylla 'Byll' Stephen, the Teeny Tiny Stevies began writing children's songs prompted by Byll's experience with her three-year-old child and the challenges of toilet training before going on to write and record a full-length album.

During the 2020 lockdown, they did TV appearances via zoom, made guest appearances on radio inside their linen cupboards, stayed up to do podcasts after putting the kids to bed, and wrote & recorded songs from separate houses.

Like so many other parents they had to get creative with tiny pockets of time and the limited space available to them.

Their album, Thoughtful Songs For Little People, went on to win Best Children’s Album in the 2020 ARIA Awards, a dream come true and highlight in an otherwise dreary year.

They’re now thrilled to hit the road for their Thoughtful Tour and they can’t wait for you to get amongst it. 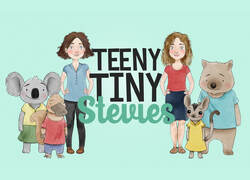