Noah's on the Beach

About the Event
Additional Information

ABOUT GROW A STAR

Our sporting themed business lunch aims to raise $20,000.00 which will go directly to our Grow a Star program, an innovative, youth mentoring and scholarship program that helps young people from disadvantaged backgrounds overcome the financial obstacles that are preventing them from following their dreams.

This first of its kind program was initiated by Compass Housing in 2012. Since its launch, the program has assisted more than 360 young people to pursue their academic, artistic and sporting goals at grassroots and representative levels.

It is open to any young person between the ages of 5-18, engaged in education, training or employment who can demonstrate a need for assistance.

We believe that encouraging generational change through empowering young people, has far reaching, long-term, positive effects with the community.

Join us for our inaugural Lunch for the Stars at the spectacular Noah's on the Beach, with local hero and former Liverpool midfielder, Craig Johnston as our guest speaker!

At Grow a Star, we help young people to realise their dreams, and we are delighted to announce that our guest speaker, Craig Johnston, is someone who knows all too well about the importance of having dreams and how realising them can change your life.

Craig Johnston is well known around Newcastle and Australia for his “grassroots to glory” story.

Born to Australian parents in Johannesburg, he grew up in Boolaroo and Speers Point. At 15 he decided he wanted to become a professional soccer player in England. His parents, understanding what it was like to have dreams and have them taken away, supported their son in his campaign by selling their house, moving to a smaller one and sacrificing much to help him realise his dream. Craig succeeded against all odds, miraculously becoming part of the Liverpool team of the 1980s - one of the greatest sides in soccer history. He scored the winnings goal in the 1986 FA Cup Final and became, and still is, Australia's most decorated footballer.

“Through his single-minded determination and ability to succeed at the game’s highest level, Craig Johnston was the catalyst that changed the thinking of Australia’s best young players” said Professional Footballers Australia Chief Executive Brendan Schwab back in 2010.

Craig went on to famously invent and patent the Adidas Predator football boot with the likes of David Beckham, Zinedine Zidane and Steven Gerrard having worn them. Ever the entrepreneur, Craig made a living from clever inventions, pioneered a television programme in Australia and developed a football-coaching system for children called Soccer Skills which he still aims to take to young people across the world, despite the campaign and difficult negotiations with parties sending him bankrupt.

Overcoming much adversity in his life, Craig continues to be motivated by these experiences and is content to be home here in Newcastle, helping kids be happier, healthier and cleverer. He encourages the virtues of team sport, believing it makes for better people and better communities.

Get your tickets today and help us change the lives of young people in our region today! 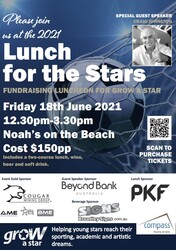