Jan Murphy Gallery is pleased to present 'The cubensis head butt' by Sydney based artist David Griggs, his first solo exhibition with the gallery.
Paintings by David Griggs may be read as narratives, drawn from incidents he observes in the city streets that relate to the texture of our times. Even more they emerge from the painting itself, becoming explorations of the discoveries he makes along the way. Most recently his process is to make detailed paintings, before disrupting them with a more gestural application, to ‘try to wash away the mechanisms we have as painters’.
In ‘The cubensis head butt’, memories of faces and places collide with the artist’s immediate surroundings. Created in a period of isolation for himself and many others globally, the artist was granted time to ‘slow down’ in the studio without distractions. Mirroring the mood of many during this period, Griggs spent many days meticulously painting detailed works which he would then contrast with wild abstract gestures, creating paintings that hold different moods on the same picture plane. As the artist states “Find the maze, get out of the maze. Then enter a new maze. Repeat.”

David Griggs (b.1975) holds a Bachelor of Visual Art from Sydney College of the Arts (1999) and a Master of Fine Arts from the University of Sydney (2007). He is a repeat finalist in The Archibald (2013, 2014, 2016, 2017, 2018, 2019) and other national prizes. He spent twelve years in The Philippines following an Asialink residency (2005) and a survey exhibition, 'David Griggs: Between Nature and Sin' toured galleries in Australia (2017-2019). Artwork by David Griggs are held in institutional collections all over Australia, notably QAGOMA, Brisbane and the Museum of Contemporary Art and Casula Powerhouse Arts Centre, Sydney. 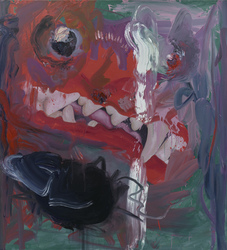