ACT NSW NT
QLD SA TAS
VIC WA
My Community Diary
Event Completed
The event you have selected has been completed and is no longer available!
To Be Held At

Find out more about this location...
Visit this location on the My Community Directory website. Note, this opens in a new window.

“Bawdy, brash and just as fabulous”

Prepare to be mesmerised by award-winning stage sensation Catherine Alcorn in her hilarious portrayal of Bette Midler when she channels the People’s Diva in this thoroughly rapturous performance!

Fresh from her US and Sydney Opera Housedebuts and hailed by critics as “uplifting and life affirming” (Canberra Times) and “masterful” (The Courier Mail), Alcorn has been thrilling audiences all over the world with her magnificent voice and razor-sharp wit, renowned as “a jewel in the crown of Australian theatre” – (Adelaide Now)

Featuring an electrifying live band, Alcorn will take you on a thrilling roller coaster ride back to the Palace Theatre, New York 1973 when she belts out the diva’s early classics including Stay With Me Baby, You’re Moving Out Today, The Rose, Wind Beneath My Wings, Boogie Woogie Bugle Boy, and In The Mood. 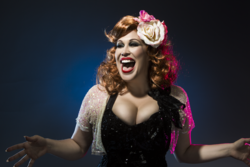